In Europe and many other jurisdictions, inventions relating to software can face specific additional hurdles to patentability. Furthermore, the growth in software automation and Artificial Intelligence means that advancements in the medical field increasingly fall within the domain of software inventions. Although software inventions “per se” are excluded from patentability, it is possible to achieve grant if certain requirements are met.

He holds a Degree in Pharmacy from the Complutense University of Madrid  and MBA (Biotechnology) (Aliter). He studied Law at the Spanish National University of Distance Education (UNED). He held the position of Business Development and Patents Manager at the biotechnology firm Genetrix Corp (gaining  experience in the field of monoclonal antibodies and adult stem cell technology). He was Patents Manager at a Spanish patent attorney firm.

He was Director of the Technology Transfer Office of the Andalusian Public Healthcare System (practical experience in Spanish civil, administrative and commercial law, and in advanced therapies (stem cells and tissue engineering, nanotechnology and gene therapy)). He obtained the title of Spanish Industrial Property Attorney, the title of European Patent Attorney and the CEIPI Diploma inPatent Litigation in Europe.

He is currently studying a Master’s Degree in Bioinformatics and the Computer Engineering Degree (UOC – Universitat Oberta de Catalunya). He joined HOFFMANN EITLE in 2011.

Richard Smith is a British and European Patent Attorney with a background in Physics. He is fluent in both English and Spanish. He belongs to the Chartered Institute of Patent Attorneys, and the EPI. He specialises in patent drafting and prosecution before the European Patent Office and theUK Intellectual Property Office and opinion work concerning patentability and freedom-to-operate studies. Richard also manages a number of worldwide portfolios including in countries such as the US, China, Japan and Australia.

His fields of expertise are the electrical, mechanical and software fields, including medical devices and medical software. Regarding his career, he studied Physics at Oxford University (2009-2013), specialising in condensed matter physics and laser physics. He obtained the Certificate in Intellectual Property Law at Queen Mary University of London in 2015. He joined the London office of HOFFMANN EITLE in 2017. He is a European and British Patent Attorney since 2018. 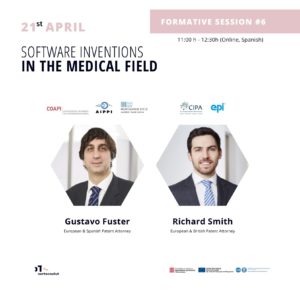